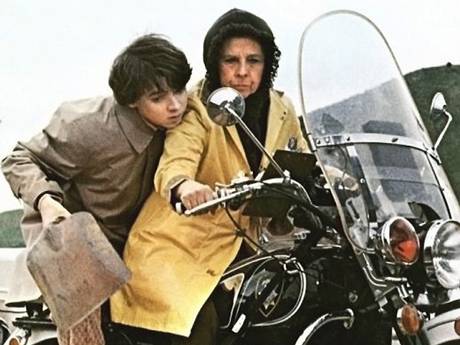 I often wonder what would happen if Dos Equis did a most interesting woman in the world campaign, using an older woman. Probably mutiny. Really though, not many things bum me out faster than the emphasis on women needing to stay young and beautiful forever in order to retain any value.

The first time I watched Harold and Maude, a dark comedy cult classic from 1971, it changed my perspective on aging, looks, and life in general. For those who haven’t seen it: just out of his teens, suicidal Harold meets Maude, who’s about to celebrate her 80th birthday, and the two become inseparable. It’s basically one of the best movies ever, and if you haven’t seen it, I pity you.

The real beauty in Maude is her free spirit, she doesn’t look like a TV grandma with facelifts and a pound of make-up; she’s the real deal. She’s not going to let being 79 stop her from modeling nude for a sculptor, no sir. She throws socially constructed beauty standards out the window, and in turn looks incredible the way she is.

Maude is punk. Her philosophy is essentially “do what thou wilt,” and she does just that. You don’t know many details about her past, except she’s had her fair share of hardships, yet she continues to live her life enthusiastically. That really says something right there, although her past was probably just straight up shitteous, she doesn’t complain–she gets on with her life. The movie briefly hints that she was a holocaust survivor, but not once do you see her going around looking for sympathy. Is that not virtuous as fuck? Basically, it reminds me that everyone gets dealt a shitty hand, so you better learn how to deal with it and move on.

One of the most important lessons from Maude is the one that you see on the bumpers of cars and reblogged on tumblr by a bunch of 15 year olds: live life to the fullest. Who do you know that really does this though? Probably no one, that’s pretty sad, huh? I think it’s such a broad statement that it just kind of goes in one ear and out the other, or people just go bat shit insane and #YOLO all over the damn town.  I think part of what makes Maude’s appeal so great is her appreciation of simple things: interactions with people, trying something new every day, and seeing the beauty in small things. Every time I watch this, I get all existential—I won’t bore you with the details, but I often wonder why I get so impatient, worried, or angry about shit that won’t even matter in a month. Nothing is going to matter when we’re dead, so you might as well enjoy the ride.