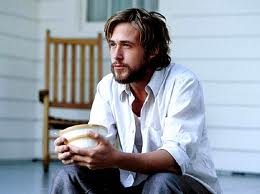 As a heterosexual male, I feel it’s time to come clean on the man crush I’ve been holding for some time on one Mr. Ryan Gosling. Move over, ladies. It’s time for us males to gush in unison.

I was young. It was a transitionally significant chapter of my life, the matter of age no longer quantifiable as adolescent. I was bound for college when I first begrudgingly saw The Notebook, a movie about a torrid and unbelievable love affair that demands from its audience feel something. Gosling had left his mark upon me despite how laughable I found the story. Rachel McAdams was pretty good looking in it too, I guess.

But there was Ryan, emanating many of the same qualities I wished to similarly possess. He had a terrific woodsmany + Christlike beard for starters, something the patches of my current “beard” remain eternally envious of. He still managed to appear classically handsome despite heavy amounts of rain, I more so resemble a wet hitchhiker with ambiguous implications for murder. Plus he was generally just a badass all around, an attribute perhaps more evident within his current roles. What he exhibited was everything I aspired to be and I never realized it.

The first time I felt the spark of my unrequited bromance was when a group of friends and I cycled through old Goosebumps episodes (worth noting Gosling would probably never do this with his friends) and discovered he was a childhood actor. I giggled like a school girl in pure glee as Ryan brought a certain level of class & sophistication to Say Cheese and Die! What was this feeling?

Much later in life I attended an aptly titled music festival in sunny California called Fuck Yeah Fest. Ryan Gosling was there with his band Dead Man’s Bones, who, however ironically, are actually halfway decent! Gosling was sporting Ray Bans as he graced the stage with an Abraham Lincoln and a chorus of children backing his vocals, indisputably awesome. Not only was this dude multitalented, he had some legitimate indie cred.

After I saw Drive I made it a personal goal of mine to follow Gosling’s entire filmography. Want to make a great movie? Put Ryan Gosling in it and he doesn’t even have to say anything. He just needs to look introspective, moody or mildly content. I learned from Gosling that the less you talk makes you more mysterious and therefor highly desirable.

Ryan Gosling will continue to be the guiding light in my life, teaching me all the important things I need to learn about becoming a man. I finally understand what the vast majority of women have be squealing about for years and choose to embrace it fully. Ryan Gosling, if you’re out there reading this: I have a a huge crush on you, strictly platonic.