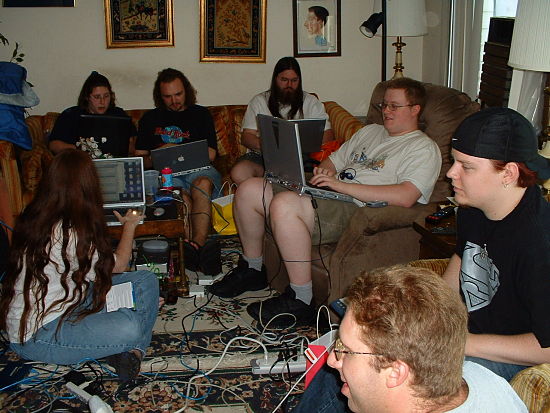 I’d been surfing Reddit for years now, mostly passively, until I went on vacation about a year ago and I figured, why not use this thing to meet people? I had a boyfriend at the time so I wasn’t looking for any rendezvous with some  mustachioed lover boy, therefore I naively decided to go to a Reddit meetup. Frankly, all I wanted to do was get some drinks and hang out with some fellow weirdos that were less likely to murder me. Well, ideally they would be less likely to murder me.

So after a series of corresponding with the local Reddit community in the area, I ended up going to a really awesome underground bar; not that I was expecting some sort of LAN party–but I was really impressed. A few tables were adorned with balloons and paper aliens, while a whole barrage of different people cluttered around them. Mostly male, mostly young, mostly normal looking guys.

There were no grossly overweight trolls wearing “I see dumb people”  shirts, or girls draped in game controller cables–these kids were alright. Unsurprisingly, the proportion of guys to girls was probably 1/10 though, that might be a gross estimation, but it made for a most interesting evening.

Throughout the night, everyone  basically acted like a bunch of high schoolers who just had their first wine cooler, obviously not handling their alcohol like proper adults, myself included. Not after long though, a few guys asked me who I was, I told them my name and my handle; they looked at me like I had a thousand eyeballs or something. They were near shouting: “Oh my god! (Username) is here!” A stampede of mid-20’s males rushed over to me and introduced themselves. My anxiety was telling me I was not drunk enough to handle this without getting completely weirded out–bartender, three more please!

My roommate Lisa was off coddling her new beau far away from all the social debauchery, so I was left vulnerable. For example, I was mid-conversation with a table of guys and girls about my hometown and all of the sudden I felt a hand snake around my waist. I looked over and a skinny young man with glasses smiled at me and said he had a layover for an hour at my local airport. Oh Christ, did he just try to pick me up by talking about airports?

I politely excused myself and got lost in the torrential stream of awkwardly dancing Redditors until I was pulled away by Sam. Sam seemed really excited about everything. I could tell he was a really intelligent dude, he just seemed really caught up in the moment, and probably let go of all his inhibitions. I had no problem hanging out with him, little did I know I would be forced to for the entire night. Everywhere I turned he was right behind me, commenting about anyone who tried to approach me and making remarks about the setting.

Lisa and her guy grew tired and wanted to head back, I decided to just leave without saying bye to anyone, because I’m an asshole. Not really, well–sort of, I was really drunk and persuadable. Anyway, we made our way up the stairs and back to street level, where another group of Redditors were standing around smoking outside. One of the people who shouted my name earlier asked me where I was going. I told him I was heading back, and that I had a great time, yada-yada. The man was probably around 6’4” and in really good shape, not that people on Reddit aren’t in good shape, just saying–he was a strong dude. The guy wrapped his muscley arms around me and said “I’m not letting you go.” I just kind of stood there, drunk as hell. My roommate proceeded to grab my arm and pull me away, the guy then got a hold of my other arm, and for a good while my poor friend and this random internet man were playing tug-of-war with my incoherent drunk ass. What is my life?

Despite the barrage of questions and giggles I received from Lisa and her boyfriend as we walked back, I had a stellar night. I had some sort of semi-cult following for 15 minutes and for an early 20’s woman stuck in a stale relationship–it was great; I had never felt so attractive in my life. I can’t speak for all Redditors and/or Reddit meet-ups, because this was my one and only experience, and it was indeed, a real fucking trip.

*names and irrelevant details have been changed