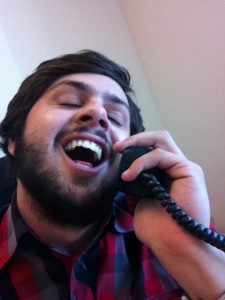 This is perhaps the most universal category of DD’s, adult beverages having a keen ability to shine a light on the most terrifying inner workings of their mind. Enough liquid courage coursing through the body is instrumental in relaying their unrequited love for the person who stopped communicating with them weeks ago – they’re still interested, they’re just bad at texting. Besides, what’s to lose? It’ll be hours before they have to wake up and deal with the consequences.

Everyone knows one of these. They’re the type of easy going person that gets along swimmingly with everyone. Get enough drinks in them and they’ll start scanning their contacts in pursuit of who most deserves a self-esteem boost. “Dude, you’re like family. I love you, man.” They’re well versed in communication, effortlessly rehashing ‘how awesome’ that one experience you shared in early college was. While it’s difficult to fault someone with such honest intentions, it’s harder to look past the amount of times you’ve had the exact conversation in the past, verbatim — or why you’re having it again at three in the morning.

The opposite side of the coin from the Lover, the No Regretter is often fueled by dour feelings of contempt or jealousy. They know they’ve had one too many and they don’t care – so committed to the cause they are in a fashion that’s nearly admirable. The Kamikaze pilot of drunk dialers, their verbal venom is targeted most often at jilted ex-flames and blacklisted friends – narrators of exacting rhetoric regarding wickedness and betrayal worthy of Shakespearian prose.

The boy who cried wolf of telephone calls. The type of narcissistic person that believes an inebriated phone call is a treat for the recipient rather than a telling display they have a problem with alcohol. This person drunk dials so much that virtually anyone they reach out to generally screens the call beyond a certain hour. Subsequently, the RO has been relegated to the vacuum of voicemail by most of their friends. They’re content in leaving 5 minute messages that often go unheard the entire way through. They’re haplessly panning for gold, looking to create one legendary message that lives on within social circles for months.

This person is entirely consumed with the notion of spearheading a social gathering or event after knocking a few back. Unfazed by reality, the Planner is dedicated to organizing a simple yet considerably inconvenient outing amongst friends regardless of minor speed bumps such as time and space. “We should totally go to Europe this summer! We could do it. Running of the bulls, dude!” Although the Planner always keeps their head in the clouds, their proposal has a tendency to crumble to pieces with the rising of the sun – should they actually manage to remember making the proposal to begin with.