Heading into its 6th year as a concert series, electronic music festival, HARD, has just announced its newest addition to the family, Red Rocks. 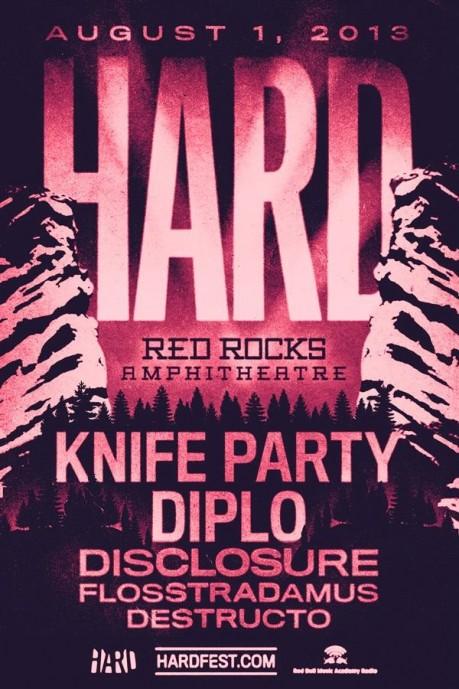 As one of the most renowned concert venues in the world, producers of HARD Summer, Colorado’s Red Rocks has been the host to a multitude of concerts and festivals. The beauty and natural build makes the venue an ideal spot for many artist to record live DVD (Dave Matthews Band, Mumford and Sons, Incubus, John Butler Trio, U2… you get it). Based in Downtown Los Angeles, creator of HARD and longtime EDM producer/DJ Gary Richards has taken the HARD festival across the country, hitting cities like Miami, New York, Detroit, and even a cruise to the Bahamas on the HARD Holy Ship! series.

Now, just days before HARD Summer (August 3 & 4), Morrison, CO will be added to the list of cities HARD leaves its footprint. Its massive, sweaty, glittery footprint.

We have come to confirm that (part of?) the HARD Red Rocks lineup has been announced and will include Destructo (Gary Richards), Flosstradamus, the UK’s Disclosure,  and headliners Diplo and Knife Party.

One Response to “HARD Announces Show at Red Rocks”