There are some people in this world who might tell you some sort of Guardian Angel is watching over them and after hearing their stories, you might just agree.

Whether you partake in some dangerous extreme sports or are just a little accident-prone, these are the people you need to find and pat on the head in the hope some of that luck will rub off. If only some of that luck would help when visiting jackpot247.com but sadly, gambling is nothing but chance. 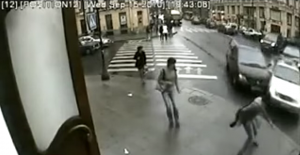 From death defying near misses to finding winning lottery tickets at the last minute, these people are the living definition of luck:

This cyclist could have been riding to work, to a friend’s house or just heading home when this terrifying near miss occurs. As he makes his way across the road a truck and car collide just in front of him and the truck tips onto two wheels, knocking the cyclist off his bike. However, when the vehicles are clear of him he is seen sitting, seemingly unscathed in the middle of the road, clearly in shock over what has just happened. The bike looks like it’s undamaged too.

Those who decide to jump out of planes are dicing with death but are of course highly trained and do numerous checks of their equipment before a jump. But things can still go wrong as skydiver Michael Holmes found when he plunged to the ground, spiraling violently as his parachute failed to deploy properly. The whole thing was captured by his and another skydiver’s head camera as they fell – it’s a nail biting watch. After breaking his fall, landing in a blackberry bush, he emerged with just a broken ankle.

6. The luckiest man in the world?

Claiming to be the luckiest, unluckiest man in the world Mark Weingard survived 9/11, Bali and the 2004 Tsunami, all through coincidences, lateness and pure luck. He was running late so did not attend a meeting at the World Trade Centre where 23 employees of the company he intended to meet with, died. He had split up with his girlfriend a week before he was supposed to travel out to Bali with her and while she was out there she visited the Sari nightclub, the night the bombs went off, and was killed. Finally, he and his family miraculously survived the disastrous tidal wave, on Boxing Day, 2004, in Indonesia.

Dashcams are now a common feature in Russia, to guard against insurance fraud and police corruption on the roads and because of these we have seen an influx of crazy driving videos posted online. One such video shows a car dangerously overtaking and crashing into oncoming traffic, completely crushing the front of the vehicle. Incredibly, the driver crawls out of the windshield, seemingly unhurt, just holding his head.

Lightening like reflexes saved this pedestrian in St Petersburg from an untimely death, as two cars plowed onto the pavement after hitting each other, trying to avoid another car which had pulled out onto the road. A CCTV camera captured the whole thing. Overall, it was a lucky escape and a good story to tell at the dinner table that evening.

Imagine clearing out your wallet and finding a lottery ticket, which you hadn’t yet checked. You go online, type in your numbers and the date and…you’ve won just over £50,000. Well, this happened to James Wilson who checked his Euromillions lottery ticket, which had just a day left before it expired, to claim his prize.

It’s always important when your hobby involves very large fast moving modes of transport that you keep an eye on where you are standing, as this man found out. As he focused his attention on a train on the other side of the tracks, another sped by him and if he had been an inch or so closer, would have hit him. He doesn’t seem too phased by the event afterwards though.

1. The video will make you gasp

1. A pint of milk and a near death experience, please

You’ve just popped into the shop to pick something up at the last minute, you head to the register and queue up but then decide to use the one next to it, as you move across a truck smashes through the front of shop, narrowly missing you by mere centimetres and crashing into the spot where you had just been standing and queuing. This happened in a 711 in the States, leaving the cashier and customer speechless.

Take a look at the CCTV footage here:
http://www.nbcconnecticut.com/news/local/Video-Shows-Store-Crash-145993915.html