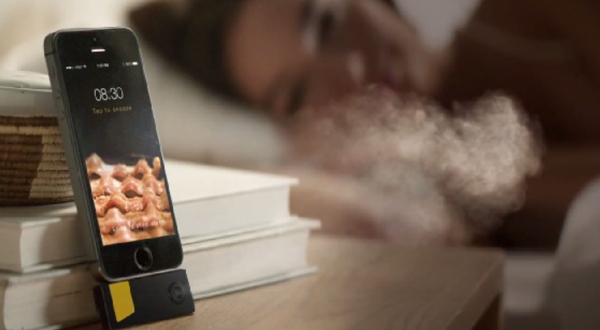 Last year, Oscar Mayer launched their Say it With Bacon ad prompting people to purchase a finely cured cut of bacon to show their loved ones how much they really care about them. Now, the fine people at the Oscar Mayer Institute For the Advancement of Bacon (OMIFAB) has released their newest product, the “Wake Up & Smell the Bacon” app.

The commercial for the device follows a beautiful woman dreaming of things like a menu with nothing but bacon, bacon raining from the sky, and even an ungodly large slice of bacon floating through the universe.

If you’re lucky enough to be the first to try out the app, you’ll be woken up by the unmatched aroma of freshly sizzling bacon, straight from your smart phone. Take a look at the advert below.

Some notable lines from the commercial include:

When scent embraces sizzle, who knows where that crispy countess will lead you?

At darkest midnight, the nostril’s north star awaits you!

When imagination blossoms, only the scent will guide you to your greatest awakening.

Wake up to the morning of your dreams… Only from Oscar Mayer.

Unfortunately this is obviously an April Fool’s joke… But god damn it if it were real you know we’d be the first people on the list to try it!