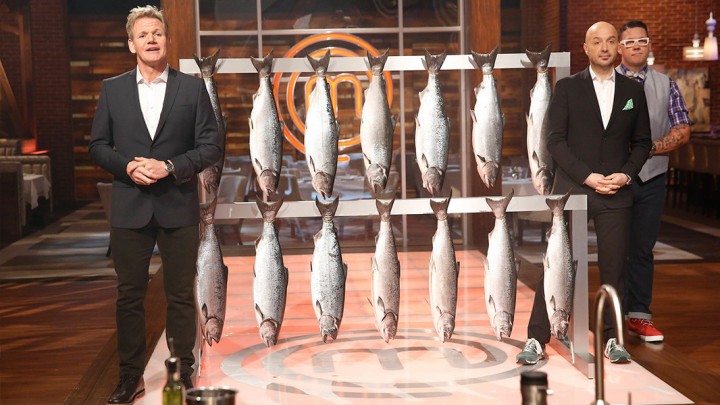 After writing a scathing dissection of this year’s Masterchef competition I decided I would waste even more of my time by doing episode recaps of every stupid episode of Masterchef for the remainder of the season.

As usual we open on a thundering orchestra as the contestants stand behind their cooking stations. Only this time there is big dumb box in the front of the room. Everybody is confused, I mean could there possibly be food in that box?

Once Gordon reveals that there are whole Salmon in the box, everybody loses their shit. Holy cow! A fish.

Next, in a shocking turn of events Gordon Ramsay himself fillets a fish, then Graham Elliot cooks it and Joe Bastianich eats it. The contestants are freaked out that two veteran chefs can clean a fish and cook it quickly.

Our favorite meek baker Elise gets a head rush while cooking a fish and faints. Then she gets back up and everything is fine. She’s embarrassed and stuff.

Courtney(Hot Brunette), Elizabeth (Hot Blonde), and Christian (Hot Black Hipster) get into the final three for the Salmon. Courtney gives Gordon some serious “do me” eyes but Christian wins with his ABSOLUTELY BONKERS Cajun Salmon and he gets an advantage THAT CHANGES EVERYTHING.

In this elimination challenge the three judges get to fill a basket with ingredients of their choice. Joe chooses a basket filled with a bunch of wine! You are crazy Joe! Wine? What? That’s the box that Christian chooses. But wait there is another advantage for Christian; he gets to choose one person who only has 30 minutes to cook the basket. Christian chooses Courtney but that’s ok Courtney totally knew it was coming…

Elise is at it again when her pasta dough falls apart. She starts crying and Gordon couldn’t be more apathetic.

Courtney kills it with her ragout and now Christian has stupid target on his back. The bumbling Cutter makes a pizza that all of the judges hate but of course he “would order it at a pizza place”. Ehran made a CRAZY savory tiramisu and Elizabeth is awesome with some stupid lasagna.

Willie made tomato soup with an egg, and Elise starts crying again when she brings up an artichoke ravioli. Gordon gives her the death stare and tells her “It tastes like you’ve given up.”

Cutter and Elise are on the chopping block and Cutter argues with judges again. But Elise’s crying proves to be too much and Gordon sends her packing. I can’t wait until we get rid of Cutter and his bumbling excuses for food.

Next Stupid Week on Masterchef

Gordon’s wife shows up and that is crazy!