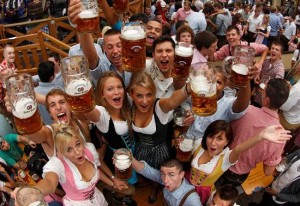 Munich, Germany is home to the world’s largest beer festival and the 16-day event is in full swing. Every year, Oktoberfest attracts over 6 million people from around the world. The 182nd Oktoberfest kicked off on September 19th and the festivities will continue through October 4th.

There are a lot of places that put on their own Oktoberfest, but nothing is quite like the original in Germany. Around 6.7 million liter of beer is consumed during the festival and the bartenders have been known to fill a liter of beer in just 1.5 seconds. A number of beer tents fill the festivalgrounds where visitors can keep refilling their giant mug.

The only beer allowed at the festival are beers that are brewed within the city limits of Munich. The following beers are the only ones that meet this criterion: Augustiner-Brau, Hacker-Pschorr-Brau, Lowenbrau, Paulaner, Spatenbrau and Staatliches Hofbrau-Munchen. 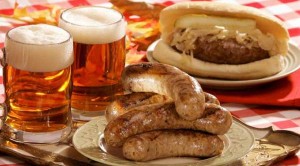 Oktoberfest doesn’t just offer endless amounts of beer, but also a variety of attractions like games and rides. Parades line the streets of the festival and it is a lot of fun to sit and watch while drinking delicious beer. Visitors can also enjoy a wide variety of traditional German food like sausages (Würstl), white sausage (Weisswurst) pretzels (Brezens), Sauerkraut, potato pancakes (Reiberdatschi) and much more.

It is always encouraged to dress up for the celebrations like in traditional Barvarian clothes or medieval historic outfits. The opening ceremony of Oktoberfest is one of the best events and this year the Mayor had the honor of tapping the first barrel. The whole city really comes together to celebrate Oktoberfest with an epic festival that has been in the making for over 180 years.