The success of the American TV series Mad Men, set in the world of advertising in the 1960s, has had huge critical acclaim both in the US and the UK. The most popular character is the chain-smoking, hard-drinking executive of the Sterling Cooper Advertising Agency, Don Draper. Don’s character is complex and includes being something of a womanizer despite being married with children. 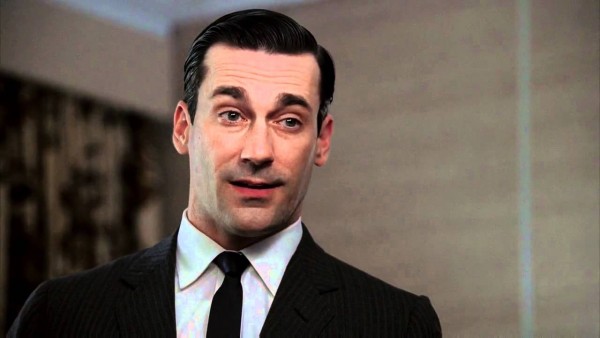 As the go-to creative guy in the agency who comes up with ideas often at the last minute, he’s the alpha male who employs sarcasm and carefully judged anger in the office when things go wrong. He’s also very careful not to show outward emotion – other than anger ­– and is highly efficient in the office environment. Basically, he wants to make money, compete for status and attract women.

In terms of sartorial elegance he achieves an effortless, smart look, and if you want to get that look – and why not – here are a few pointers.

The suit
Here you have the classic American suit, highly popular in the 1950s and 1960s, and made by companies such as Brooks Brothers and Ralph Lauren. They are soft and thick in both chest and shoulders and taper at the waist so you achieve a more V-shaped silhouette.

The jacket is a little long at the bottom, adding an illusion of length to the upper body, with lapels notched and on the slim side. Patterned colors and textured weaves are also a feature to set him out from his colleagues.

The shirts and ties
The shirt has to be white but you can vary the degree of white by wearing cream colors. For the sharpest look, though, you need a bleached white shirt and stiffly starched collar do get the Don Draper look. Ties are straight and mostly a single color, though if it complements the suit you could go for diagonal stripes in different colors. Don Draper doesn’t wear overstated patterns (as the rest of his male colleagues do) so resist the temptation to overdo your tie.

He often wears shirts that need cuff links and lets a half-inch or so of the cuff to show beyond his suit sleeves. His cuff links aren’t flashy but they set him apart from his advertising colleagues

The hats
In those days, men wore hats (watch any film set in the ’50s and ’60s and you will see that it was the norm). Draper wears fedoras made from good felt and with a tapered crown that helps mirror the shape of his chin to make him look good.

The outerwear
Look for camel hair or a tan trench coat to complete your Mad Men wardrobe.

The accessories
Don’s a bit of a whiskey drinker, to put it mildly, so if you have a friend who’s into the series and the guy and you’re looking for a gift, then whiskey glasses are the ideal present. This gift refers to that hard-drinking, manly attribute of the times. They make an attractive addition to your friend’s drinks cabinet.

Classic fashion styles together with the right accessories (maybe smoking should not be encouraged!) can bring you into the sometimes crazy world that is Mad Men.