There are a lot of cool places to visit when in Tokyo. The city is home to a lot of unique places that are very different than what people find in America. One of those spots is the Tokyo Robot Restaurant.

You can eat at this restaurant, but it is not an ideal venue to get food at. The atmosphere and design, full of light, fluorescent colors and robots, is more of a place to go to relax and have a few drinks while catching an insane, yet spectacular robot show. 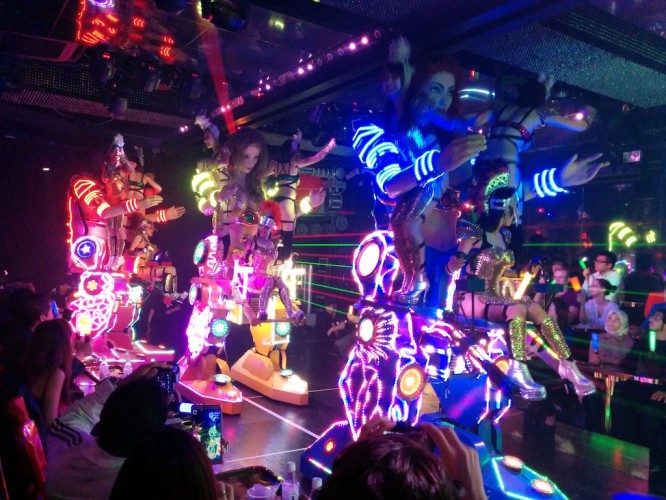 In Japan, they are exposed to robots at a very young age. So robots are just something that everyone appreciates and loves in Japan. The robot restaurant really appeals to not only tourists, but locals too.

The waiting room is an experience in itself. You can sit and have a drink while waiting for the show to start. The inside looks like a luxurious arcade, without the games. But it is complete with metallic and mirrored surfaces on every inch of the interior. There are also LED lights in just about every color and on every table sits a robot dinosaur. The waiting room has a small stage where girls with metallic bikinis and angel wings play soft music. The drinks are cheap and the vibe couldn’t be better. 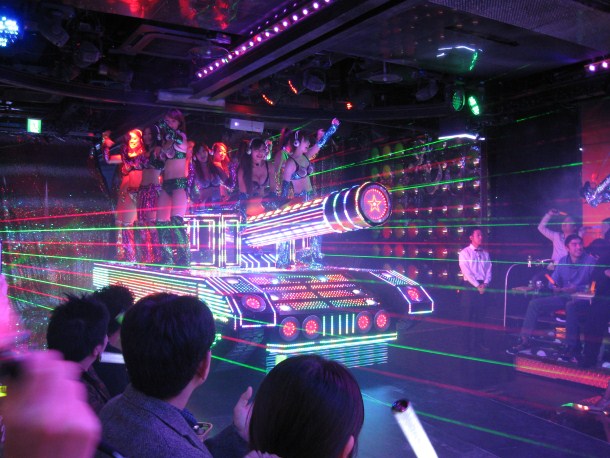 Then the show starts then that is where the robots come out to play. There are robots shaped like women, dinosaurs, pandas, sharks and action heroes. There are women everywhere dressed in showgirl glitter outfits with flashing LED lights. The performers are riding robot bikes, tanks, horses and some are even playing the drums. There is so much going on, it really is a cool experience.

The dancers control some of the robots while other robots are remote-controlled. About 20 people control the robots during the show and about another 20 actually perform during the show. The whole crew puts on a terrific show that is a great time for locals and people visiting Tokyo.