Have you heard of the new cement that will eliminate smog from the Earth? That may be an overstatement, but there is a new type of cement that will filter out nitrogen-oxide pollution in the air. 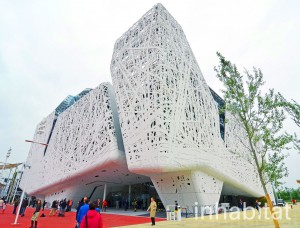 cement has been added to a building-Palazzo Italia-in Milan. This is a big achievement for environmentalists. This building will filter out the nitrogen-oxide pollutants in the air and convert them into salt. Once converted into salt, it simply washes away when it rains.

Nemesi & Partners created this building facade out of i.active Biodynamic cement panels and out the material to use in May of 2015. The building itself uses 40% less energy than an average building its size, and it adds no pollution to the atmosphere. The idea was to create a building that would act much like a tree- sucking pollutants out of the air and replacing it with oxygen.

While there is no reversing the damage humans have caused Earth, this may be a giant step forward in helping us to greatly reduce our negative footprint. Imagine if this cement was used in all areas: sidewalks, highways, buildings,etc. We could suck the pollutants out of the air as soon as we put them there, in theory.

Only time will tell if this invention is making a great contribution, but I see no reason why it shouldn’t.