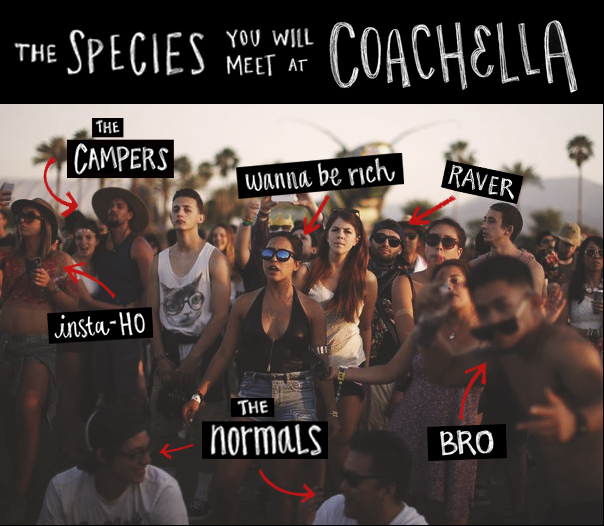 Ah, Coachella. The special time of year that exists only for 2 weekends. The sights and sounds at Coachella make the price of the weekend well worth it. A favorite pastime is going to Coachella to enjoy the music and observe the different types (species) of people attending the event. Below is a breakdown of the most common species you’ll find.

You’ll smell this species before you spot them. It’ll smell like patchouli. They are the vegans at the party who just really love being outside and smoking weed/partying hard. If it rains, that’s even better; more chance to get covered in mud and really feeeeeeel, ya know?

This species is all about being seen, recording it, and being validated for it. 100 likes? What a nobody! While some species are lowkey, hiding during the mid hours of the day, Instagram Hos and Fashionistas make their presence known. To them, Coachella is all about their new, Free People dress and knit Urban Outfitters tanks they finally get to wear.

Rich people, or the V.I.P.s of the festival are something to be seen. These are your best, but most annoying, allies at the festival. Showing up only when there’s something to be gained, they won’t hesitate to wave that V.I.P. wristband like it’s actually made of gold. Not to mention, they’re there for like…2 hours, just to see the headliners. Psh.

Wanna be rich people are just like the V.I.P.s, but without the perks. This species is great at trying to talk their way into exclusive after parties or free drinks. You can often see them clinging to the underbelly of the V.I.P.

Ah, bros…what is there to be said about bros other than, “what even are they?” Bros make it widely known that they have been waiting months for Brochella with the boys. Shotgunning/butt chugging beers, pool parties, and holding up girls on their shoulders…life as a bro is so rough.

These guys are seasoned ravers. This isn’t their first ecstasy rodeo. They’re just looking for any excuse to wave those lights around.

They $500 to spare and time off of work to go check out this festival everyone talks about. They’re just happy to be there. They’re fans of the headliners and really enjoy the food crawl. They’re the cool people at the party. Down to earth, normal, chill. Make these friends in the jungle that is Coachella.