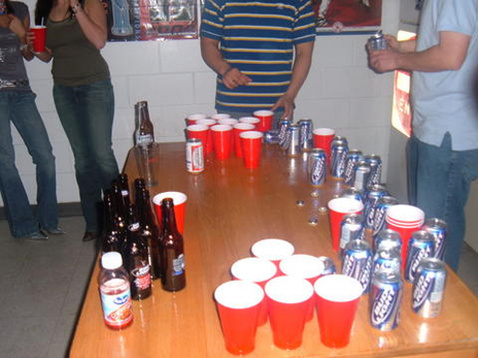 Congratulations! You’ve been accepted to college, the first step on your way to becoming a self-reliant adult/alcoholic. Chances are soon, if you already haven’t, you’ll  receive your introduction to ‘beer pong’, the wildly popular table top drinking game that made the red SOLO cup famous.

It’s a tumultuous love affair between you and beer pong, provided you’re hip to binge drinking alongside a good percentage of your peers. You may even find yourself frequenting parties specifically for beer pong, assembling the ‘dream team’ between you and your buddy you room with.

Pretty soon the only time you find yourself enjoying beer is if it’s at room temperature following a sensational NBA Jam ‘On fire!’ streak. The lack of plastic cups or the absence of ‘the other ball’ can potentially ruin the evening, despite the presence of your closest friends and sufficient amounts of beer for everybody.

Parties become divisive with the inclusion of a beer pong table, those who don’t excel at tedious carnival games quickly spurned from the action. It’s the most efficient way to kill the energy; it only takes four people and a hapless audience (probably the team next to play) to ensure everyone else is having an experience as stale as the beer.

Like the girl you were infatuated with your freshman year who was so much more sexually experienced, the appeal slowly wears off when you realize beer pong is actually just kind of gross and really just a fallback for a good time.

When you hit the point where you can have an awesome time with just a few friends and a few beers without adapting balls, cups, cards, coins or other shit children’s magicians undoubtedly own — you’ve done it! You’ve graduated to adulthood.

Now you too can glare at the guy in self-checkout ringing up the red cups and ping pong balls.