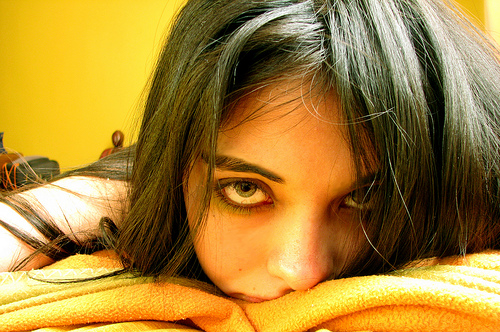 If you find yourself saying “I’m bored” more times than not, feel stuck, or have difficulty doing anything, this article is for you.

1. You post everything of any interest to the internet. Everyone is always posting about their projects, parties, every sketch, every batch of cookies–people basically share every single thing they do, as if they get credit in the game of life. I think everyone is guilty of this from time to time, but are you doing it for the right reason? Do you ever wonder why people are so addicted to sharing? Maybe because they need to trick themselves into believing that they are doing something meaningful with their lives?  If you’ve never heard of the saying “Climb a mountain, tell no one,” get familiar.

2. You don’t put yourself first. Think about how many times you sit at a party wanting to go home, or sitting at home wanting to go to a party, you’re thinking about everyone else instead of yourself. Of course you should take people into consideration when the time comes, but when was the last time you did anything you actually wanted to do? Sometimes you might be so burdened with things you should do, or stuff you might miss out on, that you can’t even think for yourself! Make a reservation for one at a restaurant, go to a concert alone, buy a plane ticket for one and see how liberating it can be to think entirely for yourself.

3. Every time you do something out of routine it becomes a huge hassle. You have to make plans, figure out who’s going, how you’re going to get there, what you’re going to wear, figure out if it’s cool. What if it’s too cool? What if it’s awkward? You conspire with your boring friends and decide that you might as well just go to your regular bar, instead of checking out this new place. You talk about the same things, talk about the same people, and sit at the same table, then go home at a decent hour in order to wake up and watch the game. Doing sometime different doesn’t have to be something that requires a lot of money or involves potential jail time, so stop making excuses. There’s a good quote by the wonderful Joseph Campbell: “We must let go of the life we had planned so as to have the life that is waiting for us.” Damn.

4. You let age restrict you. Sure people of all ages go see comic book movies or enjoy ice cream, but when it comes to doing the stuff younger people do, you shy away. Part of this involves your new definition of “fun.” Can you think of what you think is fun? Okay: sex, drinking, live music, vacations, yoga with your buddy, getting out of work an hour early–is it bad that I had to sit here for a second to think of what is actually fun as an adult? What do kids do? Explore, play, create, laugh, learn. Being childlike doesn’t always have to be a bad thing, next time you want to do something fun, go explore your city, wander into random buildings, paint with your fingers, do something that brings you out of the box of adulthood. Age is just a number, and until you’re dead, you’re allowed to try new things and be silly.

5. You’re always bored. There was a recent study in a psychology journal about how people who are constantly bored are usually more depressed or anxious. Are you? Think about that for a second, why are so sad/worried? Keep asking yourself “Why?” after every question you answer, get to the root of it. If it’s something serious, look into seeing a psychologist, and getting help for yourself. Sometimes you need that little extra push to get yourself to a good state, instead of staring at your computer hitting refresh.

In conclusion, don’t let boredom keep you from living your life. If you find yourself being bored at work, at home, anywhere–notice it. “Oh hey, look how bored I am right now!” Oddly enough, when you draw attention it outright, it can help you get motivated.

Delve into why you’re scared to do new things or anything at all–do you fear failure? Question why some aspects of your life are drab; is there anything you can do to improve it? Can you change it? Is this/that/him/her benefiting you? Stop being a broken record. If your friends think you’re slightly crazy because you don’t want to go to weekly pub trivia, let them. They’ll either get used to it, follow your example, or find someone equally as banal to replace you.

One last thing, I’m no expert, but I thoroughly suggest you try and do this controversial thing called enjoying yourself. Take time to savor your food, listen to to people with unwavering attention, feel how nice your jacket is on a cold day. Our generation emphasises hurriedness and sensory-overload, yet we’re all a bunch of miserable bastards. Have tablets and streaming reality shows really made our lives better? If you’re looking for a yes, don’t ask me–go ask the guy using a stylus to set a reminder of his girlfriend’s birthday in three days.