Set to be the Classic Rock Coachella, the Desert Trip Music Festival added a second weekend to the festival. Great news to anyone who couldn’t make the first weekend, you now have a second opportunity! You better hurry though, because tickets are on sale now.

The festival has expanded to cover two incredible weekends: October 7-9 and October 14-16  at the Empire Polo Club in Indio, California. That name may or may not sound familiar to you…it houses a little-known festival every year the kids call “Coachella”.

This is a festival you don’t want to miss with unbeatable acts: Rolling Stones, Bob Dylan, Paul McCartney, Neil Young, Roger Waters, The Who. Every act is a headliner. In fact, Desert Trip Festival recognizes that and didn’t put any fluff artists in the lineup. Each artist will play a full set on their night and all sets will begin after sunset.

This is going to be giant. Its also going to be hot–try bringing a cooling SLASH swagged out american flag cooling bandana. Each act is rumored to be making no less than $7 million for their performances. We’re stoked about the addition of a second weekend. We’ll be there! Will you? 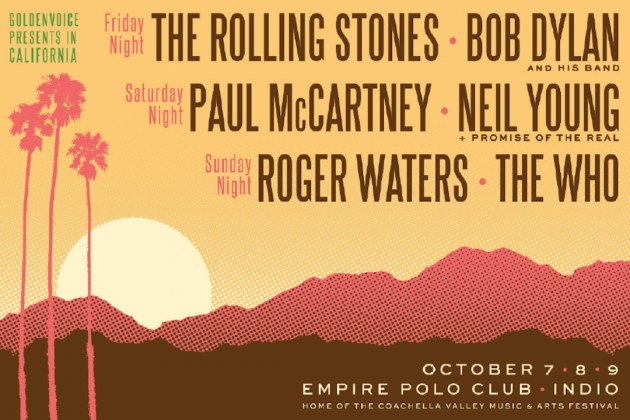