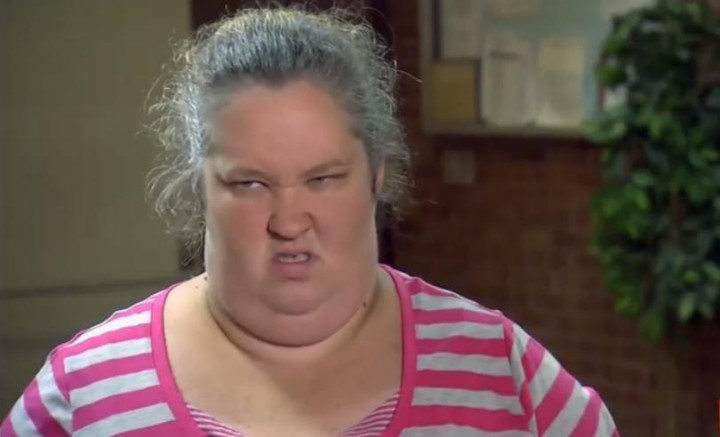 When the cable channel TLC was first introduced to the airwaves in 1972 the initials stood for The Learning Channel. The aim of the network was to educate Americans on health, politics, science and technology. In 2013 the only thing you will learn from TLC is how to be an awful parent. The fact that TLC is still broadcasting may come as a shock to most but it’s the schadenfreude culture in America that keeps shows like Here Comes Honey Boo Boo on the air. TLC exists so people can sit on their cat piss stained couches with a fat burger stare at the screen and say, “Well… at least I’m not that fucked up, this chick is eating deodorant.” The thing I find repulsive about this network is that they portray fringe countercultures in a way that makes the participants believe that they are going to be shown in a positive light. When in reality producers are tailoring their content to this simple nut graph, “LOOK! LOOK AT THESE FUCKING FREAKS! HAHA, GIVE US MONEY!”

It is truly difficult to pick the worst of TLC’s programming but I’ve got it narrowed down to the absolute worst shows on TLC (and possibly TV in general).

American television is obsessed with making mountains out of mole hills. Ever since the A & E series Intervention began documenting the real problems of real drug addicts networks have been creating spin-offs and sensationalizing people’s hobbies and habits into addictions. “Oh, you spend over 20 hours a week building model trains? You’re a train addict!” Freaky Eaters takes this to a new extreme where they attack people for liking a particular food. In one of the first episodes an otherwise healthy former wrestler is confronted by his friends and family for his growing “pizza addiction”. They even hold an intervention about how his pizza consumption is tearing his family apart. Then through some voodoo this wrestler is “cured”. Another episode features an obese woman who only eats cheesy potatoes and she will cry is she even puts a Brussels sprout in her mouth. What I’m seeing isn’t just a food addiction but some deeper underlying emotional problems, but I’m no psychologist.

I have no problem with polygamy. If consenting adults want to enter into a marriage with multiple partners more power to them. I see no difference between the polygamy debate and the gay marriage debate. What I do have a problem with is the fact that the Brown family is exposing their 17 children to intense media scrutiny. For example, in the second season of the show the Brown’s must flee their native Utah home to Las Vegas because authorities caught wind of their polygamist relationship. I wonder how that happened? Maybe it was the nationally broadcasted television series. This move proved to be particularly heartbreaking for some of the older Brown children who weren’t even allowed to tell their friends they were leaving for fear of being discovered by the authorities.

I Didn’t Know I Was Pregnant

A whole show based around women who didn’t know that they were carrying a child until they unexpectedly poop them out in an unfortunate circumstance. In theory it’s actually not a terrible concept what really sells this as an awful show is the true crime-esque reenactments that detail these women’s shocking revelations that they have a baby. Another thing that irks me about this show is thinking about what these women were doing while they were unknowingly pregnant. Were they drinking, smoking, or riding rollercoasters? Not something I would want to publicize.

This one isn’t so appalling as much as it is cringe worthy. The subjects of this show are all virgins some by choice; others by sheer ineptitude. While I respect the subjects’ choices to remain virgins until they are married or until they meet the “right one” I simply don’t understand why anybody would want to share this with the world. The one aspect of the show that infuriates me is the people who are militantly virginal. They wear their virginity like a badge of honor. It’s like a 12-year-old bragging they still have their baby teeth.

I won’t write too much about this show as it has already been vilified in the public eye on every morning talk show. The one thing I will say about it is that it is that it pains me to see these washed up mothers project themselves on their daughters (some as young as 2) and live vicariously through them. The series spawned the (unfortunate) hit Here Comes Honey Boo Boo. It’s amazing to me that Honey Boo Boo’s mother is making 50 thousand dollars an episode instead of eating bologna in a prison cafeteria for feeding her 7-year-old daughter a red bull and mountain dew cocktail every day.

Again, a cool concept for a show but very poorly executed. Breaking Amish follows Americans who have defected from the Amish community and are adjusting to modern society. Too bad the series was exposed as a fraud. One of the main subjects appeared in proactive commercials years before the series aired and didn’t seem to struggle with the new technological world that she seems to wrestle with during the show. This is just another example of TLC fabricating reality for ratings, not that this is any different than any other reality TV show, it’s just another reason to skip this network entirely.

People addicted to eating couch fluff, sleeping with a blow dryer, eating deodorant, eating glass, laxatives, eating deceased loved ones ashes, sniffing gas, dating a car, drinking urine, coffee enemas, making love to balloons, bee stings, vapor rub, smelling doll hair, and literally any other twisted neurosis you can think of. I don’t have much to say about how awful and humiliating this show is besides that.

I was going to start writing a dissertation on another show when I realized that literally every show on TLC is fucking bonkers. Whether it’s the blatant materialism of Say Yes to the Dress or the creepy familial relations the Duggar family exemplifies in 19 & Counting, TLC is the garbage disposal of television and to some extent America in general. You want to know the worst part? I watch all of this awful shit. Say what you will about TLC, they know how to pique your average viewers morbid curiosity. I for one am excited to see what the network will offer next. I’m putting my money on My Big Fat Juggalo Race Riot.